I discovered these Raccoon tracks on the bank of the Trinity River near a local Sports and Recreation Complex.

Wikipedia has this to say about the Raccoon:

Similarly, Spanish colonists adopted the Spanish word mapache from the Nahuatl mapachitli of the Aztecs, meaning “[the] one who takes everything in its hands”. In many languages, the raccoon is named for its characteristic dousing behavior in conjunction with that language’s term for bear, for example Waschbär in German, orsetto lavatore in Italian, mosómedve in Hungarian and araiguma (アライグマ) in Japanese. In French and Portuguese (in Portugal), the washing behavior is combined with these languages’ term for rat, yielding, respectively, raton laveur and ratão-lavadeiro. The raccoon’s scientific name, Procyon lotor, is neo-Latin, meaning “before-dog washer”, with lotor Latin for “washer” and Procyon Latinized Greek from προ-, “before” and κύων, “dog”. 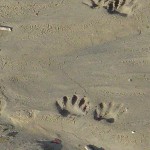 Coyote – Ghosts of the Grass
CarrolltonRaccoonSign
By DFWUWSeptember 1, 2011Chris Jackson's DFW Urban WildlifeLeave a Comment on Raccoon – Tracks in the Mud