On a recent trip to New York City we had the opportunity to catch a glimpse of Pale Male, the famous Red-tailed Hawk who lives near Central Park.

Pale Male first came to Manhattan in 1991 as a first year juvenile. He quickly found a mate, and the pair built a nest above a window on the building located at 927 Fifth Avenue—very exclusive real estate. By 1995 Pale Male and his mate had successfully raised a brood of 3 eyasses. With this success, Pale Male and his mate became the first breeding pair of Red-tailed Hawks in Manhattan in recent memory.

Fame followed for Pale Male, as his ability to persevere in the urban environment in New York City earned him a dedicated following. Over the years Pale Male has been the subject of television programs, movies, books and websites. A cadre of loyal fans meet regularly at the Model Boat Pond in Central Park to observe Pale Male and his family.

Pale Male was only at the nest for a short time after we arrived. He soon flew away, presumably in search of his eyasses’ next meal. Pale Male’s current mate, a Red-tailed Hawk named Lima, was present for our entire visit, and we were thrilled to see her feed her two eyasses as we watched. 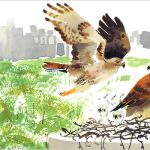 The Story of Pale Male 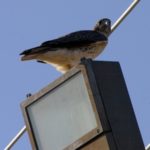 Red-tailed Hawk – In the Land of Gar 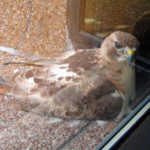