In urban and suburban areas there are a surprising number of places, that in spite of being surrounded by human activity, rarely if ever experience the direct presence of people. Even in the most urban of areas there are places that are intruded on only as frequently, and briefly, as the occurrence of scheduled lawn maintenance. There are some areas that do not even receive that much traffic. These isolated pockets can be as small and unexpected as the bushes in a median near a busy intersection, or as obvious as the landscaping in front of an office building. Vacant lots, gullies, landscaping, parks, and golf courses, all provide easy to overlook areas of urban remoteness.

These hidden-in-plain-sight oases of isolation are one of the keys to urban wildlife survival. Rarely disturbed, these places make excellent retreats for urban wildlife, providing excellent places for hiding out, denning and raising young. Small nocturnal mammals such as Eastern Cottontails, Raccoons, Opossums, Skunks and Armadillos can find ample shelter in these areas to safely wait out the day before coming out to forage after dark. After the human inhabitants retire for the night the surrounding urban areas provide an abundance of easy to secure food and water. Even mammals as large as Coyotes and Bobcats are able to make use of these unexpected hiding places.

But if larger animals, such as White-tailed Deer, are going to survive in a mostly urban environment they will require a great deal more room. Fortunately, such areas do exist in the Dallas/Fort Worth area. The Trinity River and its many tributaries provide the most contiguous areas of heavily wooded remoteness in our urban environment. Farms and ranches, working or abandoned, when surrounded by urban sprawl also create large pockets of relatively undisturbed land, and provide excellent habitats for a surprising array of animals, both large and small.

I recently found one such place in far Southeast Denton County. This old ranch of roughly 700 acres of rolling hills is bisected by a good creek and its accompanying riparian forest. There are a number of large ponds on the property. The property is bordered on all four sides by major streets, and is surrounded by urban development consisting of Houses, Apartments, Retail Establishments, Heavy Industry, and Office Buildings.

In the winter of 2009 I began a general survey of the property in order to get an idea of where best to put my cameras. I quickly discovered that the animals that called this ranch home used the cattle trails as a sort of highway system with which to navigate around the property. Then in March of 2009 I decided on a particularly portion of the trail system to concentrate my efforts on. In this area, the woods, creeks, and barbed-wire fences came together in such a way as to form a narrow funnel for animals wishing to move from one portion of the property to another. I set up two scouting cameras, one at each end of the funnel, and photographed the animal activity on this trail over the course of an entire year. The results of this effort can be found below:

I knew when I visited this ranch that it would be the perfect location for my “Year on the Trail” project. There were signs of wildlife activity everywhere I looked. My first goal was to get an idea of what kind of animals were on the property, and a feel for where they were located and how they moved about. To that end I set up a couple of scouting cameras in areas that seemed promising. Some of the photographs I captured are included in the gallery below:

Continued at A Year on the Trail, Part 2 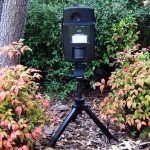