This happen every five or six years or so. Someone in authority takes notice of a Beaver pond located somewhere along the creek that runs through this community, the animals are trapped, the is dam removed or breached, and the water is drained.

The headwaters of this small creek begin only about a quarter mile east of the location of this former Beaver pond, and consists of a single, large culvert draining street runoff. In this part of town the creek runs for about a mile and a half as it squeezes its way between two fully developed residential subdivisions. The creek flows through a wide man-made channel on its way to the mighty Trinity a few more miles to the west. The creek has been allowed to go feral, and is filled with dense vegetation consisting largely of Cattail reeds, Poverty Weed, Black Willows, and other water tolerant plants.

Beavers have been active on this creek for decades. Over the years there has been as many as four active Beaver dam operating on this stretch of creek at the same time. There is almost always at least one. Several times over the last two decades an effort has been made to remove Beavers. In one instance the city even had earth-movers down in the channel in order to completely dismantle the Beaver’s handiwork.

Ironically, this is such good Beaver habitat that it is usually only a season or two before a new set of the intrepid rodents move in an re-establish a homestead.

There are a good number of people in North Texas who seem to believe that just because the Beavers are present, something must be done about them. It appears that the decision to remove these Beavers and drain the pond was likely a case where only the opinions and concerns of a limited set of people were heard and considered. I don’t believe that many folks who might have liked to see the Beavers stay were invited to weigh in.

To my knowledge, the Beavers were not causing any serious issues now or at any time in the past. In fact, the pond had become quite a nice ecosystem, which included many kinds of native wildlife that you would not ordinarily find in a suburban neighborhood. The lists of animals making use of habitat includes: Raccoons, Coyotes, Bobcats, Striped Skunks, Herons and Egrets, Anhingas, Canada Geese, Gadwall, Mallards, Belted Kingfishers, Eastern Phoebes, Barn Swallows, Cliff Swallows, Cooper’s Hawks, Red-shouldered Hawks, Wilson’s Snipes, various turtles, and numerous others.

One upside to all of this—if you’d like to look for one—is that with the water removed, we now have the opportunity to get a look at parts of the Beaver lodge and pond that would not ordinarily be visible. Of particular interest are the multiple entrances into the lodge. These access points would have been under water when the pond was full, and the Beavers would have accessed them while submerged.

It only took the removal of a small section of the dam in order to drain the pond. Digging out a square-cut portion of the dam—just a little over a foot wide and inline with the deepest part of the old creek channel—is all that was required. Once the dam was breached, the pond water drained away quickly, leaving an expansive mudflat behind. 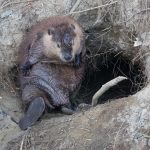 The Beaver from the Black River 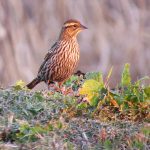 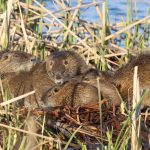 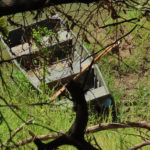