We’ve had a lot of rain this May. Eleven days straight at last count, plus several miscellaneous days earlier in the month, and maybe more to come. It’s been very wet. And, while some of us might have preferred for it to be a little drier, for the area’s semi-aquatic amphibians and reptiles the spring showers have been a real boon. Springtime brings warm weather, plentiful rain, and—of course—lots of new baby animals. The combination of these factors means that many of our more mobile semi-aquatic wildlife species are going to be on the move.

In times like these a cadre of reptiles and amphibians will be roaming the landscape in search of new places to call home. This is the normal way of things. Suitable fresh water resources are limited in North Texas, and good ones are in high demand. It is required for the survival of these animals that they wander and explore. They must find new waterways to colonize. It’s instinctual. It’s in their DNA. For a variety of reasons semi-aquatic animals are driven to occasionally leave the creeks and ponds they live in to seek out someplace new.

Long term survival is a prime consideration, and wide dispersal is a winning strategy. Pioneering new home waters ensures a healthy gene pool by shuffling the deck in any given wetland. It also helps protect against catastrophes caused by drought or other drastic habitat changes. If you are a semi-aquatic critter, and your home pond is drained to facilitate a new construction project, it helps if some of your offspring have relocated to other suitable environs away from the immediate area.

Warm wet weather facilitates this kind of dispersal. Animals like turtles and frogs benefit from the rainy and warm weather as they make their way across the landscape. Warm—but not hot—springtime temperatures permits these cold-blooded animals to have the energy to be mobile, while the extra moisture reduces the threat of desiccation.

Unfortunately, in urban and suburban areas dispersing semi-aquatic wildlife will face a number of other challenges. Many will wanders long distances without ever finding a suitable new habitat they can colonize. Many more will meet their end at the first thoroughfare they attempt to cross. Few of these animals have the speed or mobility they need to successfully navigate a busy city street. This spring I’ve seen reports from all across the metroplex about people finding and rescuing turtles in precarious positions—traversing dangerous streets or parking lots are the most common scenarios.

We’ve come across a few of these critters-on-the-move ourselves over the last couple of days. See the photographs below…

We discovered this wayward turtle as he was attempting to cross Hebron Parkway in Carrollton, TX. Hebron Parkway is a busy, six-lane thoroughfare, and this little turtle quickly got himself into trouble. The juvenile Common Snapping Turtle realized his mistake about midway across the first lane he tried to transit, and was hunkered down—retreating back into his shell as each car passed by. Left to his own devices he might have been there for hours waiting for the traffic to subside, or his trek may have ended in tragedy if he had tried to make a dash for it.

I came across this massive male American Bullfrog while walking through a local creek side park. Coming in at around 8 inches long in the pictured sitting position, this is one of the largest bullfrogs I have ever encountered. This big fella was making the trek from pond to creek and had about 100 yard of ground to cover on the journey. Terrain to be crossed included a cattail marsh, mowed lawn grass, a concrete trail, and a section of riparian woods. Let’s hope he made it!

I came across this Common Musk Turtle just a little further down the trail from the bullfrog. The turtle was making the same journey as the frog only in the opposite direction. His travels will be similarly difficult.

These turtles are also sometimes called “stinkpots” because of a foul odor secretion they produce as a defense mechanism. Luckily, we dodged that particular bullet on this day! Here is some of what Wikipedia has to say about this interesting species of aquatic turtle…

Sternotherus odoratus is a species of small turtle in the family Kinosternidae. The species is native to southeastern Canada and much of the Eastern United States. It is also known commonly as the common musk turtle, eastern musk turtle, or stinkpot due to its ability to release a foul musky odor from scent glands on the edge of its shell, possibly to deter predation. This turtle is grouped in the same family as mud turtles.

The eastern musk turtle is almost entirely aquatic, spending the vast majority of its time in shallow, heavily vegetated waters of slow moving creeks, or in ponds. It typically only ventures onto land when the female lays eggs, or in some cases, to bask.

The stinkpot is carnivorous, consuming a wide variety of aquatic invertebrates including crayfish, freshwater clams, snails, aquatic larvae, and various insects. It will also eat fish, tadpoles, and carrion. A hatchling’s diet is much more carnivorous than an adult’s, and may slowly acquire a taste for aquatic plants as the turtle matures.

The next critter to cross our path was a Spiny Softshell Turtle. Like the others in this article, this softshell turtle was also on the move due to the wet weather. We found him as he crossed a concrete bike trail in our neighborhood park.

This individual was a juvenile, roughly the same size as the Common Snapping Turtle and Common Musk Turtle mentioned earlier. Spiny Softshell Turtles like this one can actually grow to be quite large. It is not unusual for adult females to have carapaces that are as big around as dinner plates.

I found these tadpoles in a small rain-water puddle (see the pictures below). Most of the water in this puddle was situated over a low spot in the lawn grass, with overflow spilling onto a concrete walking trail.

Hundreds of little black tadpoles were visible swimming in the water covering the trail. These are likely Blanchard’s Cricket Frog tadpoles based on such evidence as their color, size, and situation. Blanchard’s Cricket Frog tadpoles can take up to 90 days to transform into froglets. The tadpoles in this small pool will be in a race against time in order to complete their metamorphosis. It’s hard to imagine this little puddle lasting very long once the intense summer heat arrives in just a few more weeks. 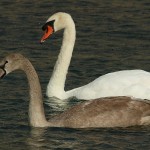