Well, here’s something I don’t see in my neighborhood everyday! This is a juvenile Anhinga, a bird not often seen outside a few select environs around the metroplex. Other than a few breeding birds at the UTSWMC rookery near downtown Dallas, I most frequently encounter Anhingas in remote places along the Trinity River.

I found this bird in our neighborhood creek. He was perched just above the water on a tree trunk felled by Beavers. In fact, this part of the creek is a relatively deep water Beaver Pond, which is likely what attracted the Anhinga to this spot in the first place.

Urban Beavers do a great job transforming habitats all around the metroplex. In this case, the busy rodents had constructed a mud-and-reed dam dozens of yards in length. A large impoundment water soon followed. The Beavers worked to clear reeds and other vegetation, creating significant areas of open water, while leaving enough brush to allow for plenty of cover. A vibrant urban ecosystem resulted.

Anhingas are unusual birds. The hunt by swimming underwater propelled by their large webbed feet. Anhingas prey on fish, which they often spear with their long pointed beak. Other aquatic animals, such as crayfish, snakes, and small turtles are also on the menu, depending on availability.

Here is how Wikipedia describes the unique Anhinga…

The anhinga (/ænˈhɪŋɡə/; Anhinga anhinga), sometimes called snakebird, darter, American darter, or water turkey, is a water bird of the warmer parts of the Americas. The word anhinga comes from the Brazilian Tupi language and means devil bird or snake bird. The origin of the name snakebird is apparent when swimming: only the neck appears above water so the bird looks like a snake ready to strike. They do not have external nares (nostrils) and breathe solely through their epiglottis.

The anhinga is placed in the darter family, Anhingidae, and is closely related to Indian (Anhinga melanogaster), African (Anhinga rufa), and Australian (Anhinga novaehollandiae) darters. Like other darters, the anhinga hunts by spearing fish and other small prey using its sharp, slender beak.

Later that same day, I found the Anhinga perched again in his favorite spot above the water. This time he had a sprig of aquatic vegetation in his beak. As I watched, the big black bird made a game of it, tossing the strands into the air and catching them as they came back down. The Anhinga did this over and over again!

Anihingas do not have waterproof feathers like ducks and geese. In some of the pictures below you might notice the Anhinga spread its water-logged wings in an effort to speed the drying of his feathers.

As you can imagine, the Anhinga shared this pond with a number of other critters. As mentioned earlier, Beaver sign was abundant all around the pond. Stumps of numerous Black Willow Trees (a Beaver favorite) could be found along the water’s edge. A large Beaver lodge sat commandingly in the middle of the big water feature.

Red-eared Sliders find this Beaver pond, with all of the tree trunks laying across the water, a prime spot for basking. Dozens of these turtles can be found perched on the dead-falls and soaking up the sun at any given moment.

A little further upstream, in a small grove of spared willow trees, I discovered several attractive Yellow-crowned Night Herons. These bird were hunting the shallows, protected from the heat of the day by the shade cast by the few remaining willows.

Upon examining my pictures at home, I discovered that one of the herons had a nasty and very serious looking foot injury. The trauma appears to be relatively recent, and has apparently cost the bird his middle toe. Despite the gravity of the injury, nothing about the birds behavior clued me into the problem while I was on site observing. I am frequently amazed at the resilience displayed by our urban wildlife

Sharing the willow branches with the night herons was a pair of these slightly smaller, but equally attractive, Green Herons. These clever and engaging birds are always a joy to watch. Here is how Wikipedia describes these charming birds…

The habitat of the green heron is small wetlands in low-lying areas. The species is most conspicuous during dusk and dawn, and if anything these birds are nocturnal rather than diurnal, preferring to retreat to sheltered areas in daytime. They feed actively during the day, however, if hungry or provisioning young. Shore-living individuals adapt to the rhythm of the tides. They mainly eat small fish, frogs and aquatic arthropods, but may take any invertebrate or vertebrate prey they can catch, including such animals like leeches and mice. Green herons are intolerant of other birds – including conspecifics – when feeding and are not seen to forage in groups. They typically stand still on shore or in shallow water or perch upon branches and await prey. Sometimes they drop food, insects, or other small objects on the water’s surface to attract fish, making them one of the few known tool-using species. This feeding method has led some to title the green and closely related striated heron as among the world’s most intelligent birds. They are able to hover briefly to catch prey

The following morning I was eager to have another look at the snakebird. I was curious to see if he was still going to be at the pond, or if this had been just a one-time anomaly. I planned to swing by the creek as part of our morning dog walk.

As we came round to the Beaver pond, I was disappointed to find the young Anhinga missing from his favorite perch. I quickly scanned the rest of the pond and still found no sign of the big black bird.

Then it occurred to me to look up… There he was, soaring high in the sky, tracing out big circles against the blue, as Anhingas are apt to do. Maybe he will stick around for a while after all. 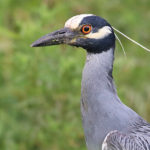 One Reply to “An Anhinga!”