Things were holding steady at swan lake this week. The lone remaining cygnet is right around 5 weeks old now, and he continues to thrive.

The baby swan is now feeding almost exclusively on aquatic vegetation. According to my reference materials, cygnets begin life feeding mostly on small aquatic invertebrates such as insects, mollusks, and crustaceans. This diet is required to provide them with the protein they need to support their rapid early growth. Later, at around 4 to 6 weeks, the juvenile’s diet becomes more like that of an adult bird and is composed of mostly vegetation.

I did a quick search on the internet to see if I could get some idea about the age at which juvenile Mute Swans become fully feathered and are able to fly. The information I found was conflicting and not very specific.

One source stated that the baby swan would fledge at 60 days. That’s less than 4 weeks away, so I’m a little skeptical of that claim. This little guy is still covered in down—there is no feather development yet. To go from down covered to fully feathered in just four weeks seems like a bit of a stretch for me.

Other websites suggested 10 weeks or 13 to 17 weeks before the cygnet would reach the fledgling stage. Those may be better estimates. We shall see.

In addition to the swans, there was plenty of additional urban wildlife activity at the lake and around town on this late May afternoon. At the north end of the lake, reed-loving Red-wing Blackbirds were doing their thing. The males were puffing up their plumage and displaying their distinctive red and yellow shoulder patches. Harsh sounding call accompany these displays which are meant to attract mates and establish territories.

Female Red-wing Blackbirds look very different from the males. They sport a muted plumage of various shades of brown speckled with white. This coloration helps keep the female well camouflaged as she sits on the nest incubating eggs for up to 14 days.

The female blackbirds were very busy on this afternoon, flying in and out of the marshy, reedy areas of the pond’s perimeter. I suspect there are many nests hidden inside.

Herons and egrets were also busy patrolling the shore of this small lake, hunting in the shallow water. A yellow-crowned Night Heron confidently stalked small aquatic animals from the banks, all the while paying very little attention to the people enjoying the park on this warm Friday afternoon.

I have found Yellow-crowned Night Herons to be relatively tolerant of observation and being photographed. It is always a joy to have an opportunity to take the picture of one of these exotic looking birds.

Also present was a smaller and more skittish Green Heron. These attractive birds are not often seen out in the open and tend to be much less amenable to being observed than are the Yellow-crowned Night Herons. I was only able to get a quick, long-distance shot of this Green Heron before he flew away.

Here is what Wikipedia has to say about the ecology of the Green Heron:

The habitat of the Green Heron is small wetlands in low-lying areas. The species is most conspicuous during dusk and dawn, and if anything these birds are nocturnal rather than diurnal, preferring to retreat to sheltered areas in daytime. They feed actively during the day, however, if hungry or provisioning young. Shore-living individuals adapt to the rhythm of the tides. They mainly eat small fish, frogs and aquatic arthropods, but may take any invertebrate or vertebrate prey they can catch, including such animals like leeches and mice. Green Herons are intolerant of other birds – including conspecifics – when feeding and are not seen to forage in groups. They typically stand still on shore or in shallow water or perch upon branches and await prey. Sometimes they drop food, insects, or other small objects on the water’s surface to attract fish, making them one of the few known tool-using species. This feeding method has led some to title the green and closely related Striated Heron as among the world’s most intelligent birds. They are able to hover briefly to catch prey.

Another interesting tidbit from Wikipedia about the Green Heron is their recorded tool use:

Green herons are one of the few species of animal known to use tools. In particular, they commonly use bread crusts, insects, or other items as bait. The bait is dropped onto the surface of a body of water in order to lure fish. When a fish takes the bait, the green heron will then grab and eat the fish.

There are many videos of this behavior available on the internet. Here is a link to one of them: Amazing Bird Fishes Like A Human.

Finally, there was a handsome Great Egret working his way around the water’s edge. This the largest of the three herons in today’s post. These elegant looking birds can stand as tall 3.5 feet, and can sport a wingspan of anywhere from 52 to 67 inches.

Red-eared Slider turtles are plentiful at this pond. These turtles are usually very sensitive to the presence of people, but at this busy park even they have become more tolerant. Last week I posted a picture of one of the many Red-eared Sliders at this pond who have learned to feed at the water’s edge when bread is being offered to the ducks.

Ordinarily, only a fleeting glimpse of these turtles would be likely. They can sometimes be seen poking their heads out of the water for a breath of air. Other times they may climb on to the bank or a piece of drift wood to bask in the sun. But as soon as they turtles believe they have attracted your attention, they quickly slide back into the water.

The turtle in the picture below is also an exception to this rule. This young slider actually crawled out of the water and onto this log just a short distance from where I was standing. He posed quite nicely for me, don’t you think?

A couple of Killdeers were observed lounging lakeside and engaging in other activities near a group of Rock Doves. These attractive birds, with their big orange eyes and abrupt motions are always a delight to watch.

I thought you all might also enjoy this video of four flightless and semi-independent juvenile Mallards. The group was feeding in the shallow water of a small lake located in a community park. This appears to be a prime spot. Notice how the ducks stomp the mud periodically to stir it up before upending to feed.

My last find of the day was an exciting one. Below is a picture of a nesting Scissor-tailed Flycatcher. This should be a fun nest to keep an eye on over the next several weeks!

Here is what Wikipedia has to say about the charming Scissor-tailed Flycatcher:

The Scissor-tailed Flycatcher (Tyrannus forficatus), also known as the Texas bird-of-paradise and Swallow-tailed Flycatcher, is a long-tailed insectivorous (insect-eating) bird of the genus Tyrannus, whose members are collectively referred to as kingbirds. The kingbirds are a group of large insectivorous birds in the tyrant flycatcher (Tyrannidae) family. The scissor-tailed flycatcher is found in North and Central America.

They build a cup nest in isolated trees or shrubs, sometimes using artificial sites such as telephone poles near towns. The male performs a spectacular aerial display during courtship with his long tail forks streaming out behind him. Both parents feed the young. Like other kingbirds, they are very aggressive in defending their nest. Clutches contain three to six eggs.

In the summer, Scissor-tailed flycatchers feed mainly on insects (grasshoppers, robber-flies, and dragonflies), which they may catch by waiting on a perch and then flying out to catch them in flight (hawking). For additional food in the winter they will also eat some berries.

Their breeding habitat is open shrubby country with scattered trees in the south-central states of Texas, Oklahoma, Kansas; western portions of Louisiana, Arkansas, and Missouri; far eastern New Mexico; and northeastern Mexico. Reported sightings record occasional stray visitors as far north as southern Canada and as far east as Florida and Georgia. They migrate through Texas and eastern Mexico to their winter non-breeding range, from southern Mexico to Panama. Pre-migratory roosts and flocks flying south may contain as many as 1,000 birds.

Things were also happening away from the pond on this day. In the pictures below you will find a male Northern Cardinal who spent a noisy day just outside my study window calling for his recently fledged offspring. The adult cardinal would arrive carrying food, and then vocalize loudly to get the attention of his fledglings. The young birds would rush in to retrieve whatever tidbit their father had brought them, and then immediately retreat back into the cover of the landscaping.

I saw the adult male off and on all day long, but I only managed a brief look at the juveniles and was unable to take their picture this time around.

Finally, there are the nesting Mallards that I first reported on last week. These guys have built their nest in a busy parking lot in a spot that is 300 yards or more from the nearest body of water.

Unfortunately, the distance to water is not the only obstacle the ducklings will face when they hatch. They will first have to survive the traffic in this parking lot, and if they become mobile during peak hours they stand very little chance of doing that.

If the ducklings somehow manage to avoid the vehicular hazards of this parking lot, they are still likely to succumb to heat and exhaustion before making it to their next challenge.

Once out of the parking lot, the Mallard family will have two choices. They can attempt to make it to a large pond over two hundred yards away, but this will require the newborn ducklings to cross a busy six lane street. It’s hard to imagine a scenario where they will be able to safely cross this road.

The other option for the ducks is not much better. This alternative will require them to first cross a busy four lane road and then another large parking lot in order to make it to a small creek nearly 300 yards away. A good outcome here is also unlikely, I think. 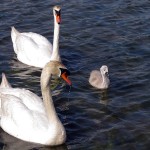