I don’t encounter Loggerhead Shrikes very often—usually just once or twice a year. And even though their range maps show them present in the Dallas/Fort Worth area year round, most of my observations have occurred during the winter months. This, then, is likely my sighting for the year 2020.

I found this loggerhead at the trailhead just as I was about to depart on a hike into the Trinity River bottomlands. I spent more than a few minutes following him around from perch to perch, while the intrepid little bird busied himself hunting winter invertebrates in the dormant grass below.

I find Loggerhead Shrikes to be intriguing for a number of reasons. At first glance they are easy to mistake for the much more common Northern Mockingbird—the two are superficially very similar in appearances. But the the loggerhead brings a little extra to the table. Shrikes are the songbird version of a mighty raptor, appropriately miniaturized for their niche of the ecosystem. Notice the Loggerhead Shrike’s oversized and hooked beak for example—very hawk-like.

It’s only when you look at the shrike’s feet that the raptor analogy begin to break down. The loggerhead is under-equipped with the dainty feet of a song bird, not the powerful grasping digits and razor sharp talons of falcons, hawks, and eagles. The clever Loggerhead Shrike makes up for this deficit in a fascinating way. Here’s how Wikipedia describes the Loggerhead Shrike’s unusual characteristics…

The loggerhead shrike (Lanius ludovicianus) is a passerine bird in the family Laniidae. It is the only member of the shrike family endemic to North America; the related northern shrike (L. borealis) occurs north of its range but also in the eastern Palearctic. It is nicknamed the butcherbird after its carnivorous tendencies, as it consumes prey such as amphibians, insects, lizards, small mammals and small birds, and some prey end up displayed and stored at a site, for example in a tree. Due to its small size and weak talons, this predatory bird relies on impaling its prey upon thorns or barbed wire for facilitated consumption. 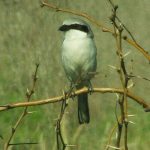 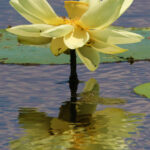 One Reply to “The Butcher Bird”