This post will mark my last visit to Josey Ranch Lake Park this summer. The juvenile Mute Swan, whose progress I have been following is very nearly grown now. He will be independent and on his own soon.

The young swan is fully feathered, but still sports the gray plumage of youth. He will transition to all white after his first full molt next spring.

After photographing the Mute Swans for the better part of an hour, I switched gears and began making my way through the park observing all of the other great urban wildlife it has to offer.

There are still Mallard ducklings being born with some regularity at Josey Ranch Lake. It is amusing how quickly they learn to equate people with food. The young birds recognize very early that park patrons often come bearing gifts of tasty bread!

The young birds are not bashful about approaching new people on the scene—much to the dismay of their more cautious mother!

The Great-tailed Grackle is one of the most successful examples of urban wildlife. These adaptable birds do extremely well in the city, where urban abundance encourages them to reproduce prodigiously. Indeed, there was another bumper crop of baby grackles again this year.

At this time of the year, most of the juvenile grackles have reached adult size and are able to fly. Still, many—if not most—of the youngsters continue to follow their parents around begging to be fed for quite some time after they should be capable of caring for themselves.

Nutria were present on the banks of the lake again this week as per usual. I found the big fellow below very entertaining as he engaged in his feeding and grooming activities without concern for my proximity.

Wandering a little more widely than normal, I made my way over to the second, smaller lake on the park property. There I discovered and American Coot in possible distress. A couple of the bird’s feather jutted up as if the bird had sustained some kind of injury. Hopefully this is not a problem that a molt cannot effectively address.

At this same lake there was a small flock of Canada Geese present. I find these big birds extremely attractive—they are handsome and elegant. Canada Geese do very well in an urban environment. Here is what Wikipedia has to say about these successful and adaptable birds:

This species is native to North America. It breeds in Canada and the northern United States in a variety of habitats. The Great Lakes region maintains a very large population of Canada geese. Canada geese occur year-round in the southern part of their breeding range, including most of the eastern seaboard and the Pacific coast. Between California and South Carolina in the southern United States and northern Mexico, Canada geese are primarily present as migrants from further north during the winter.

By the early 20th century, over-hunting and loss of habitat in the late 19th century and early 20th century had resulted in a serious decline in the numbers of this bird in its native range. The giant Canada goose subspecies was believed to be extinct in the 1950s until, in 1962, a small flock was discovered wintering in Rochester, Minnesota, by Harold Hanson of the Illinois Natural History Survey. In 1964, the Northern Prairie Wildlife Research Center was built near Jamestown. Its first director, Harvey K. Nelson, talked Forrest Lee into leaving Minnesota. Forrest Lee would head the center’s Canada goose production and restoration program. Forrest soon had 64 pens with 64 breeding pairs of screened, high-quality birds. The project involved private, state and federal resources and relied on the expertise and cooperation of many individuals. By the end of 1981, more than 6,000 giant Canada geese had been released at 83 sites in 26 counties in North Dakota. With improved game laws and habitat recreation and preservation programs, their populations have recovered in most of their range, although some local populations, especially of the subspecies occidentalis, may still be declining.[citation needed]

In recent years, Canada goose populations in some areas have grown substantially, so much so that many consider them pests for their droppings, bacteria in their droppings, noise, and confrontational behavior. This problem is partially due to the removal of natural predators and an abundance of safe, man-made bodies of water near food sources, such as those found on golf courses, in public parks and beaches, and in planned communities. Due in part to the interbreeding of various migratory subspecies with the introduced non-migratory Giant subspecies, Canada geese are frequently a year-around feature of such urban environments.

Contrary to its normal migration routine, large flocks of Canada geese have established permanent residence in Esquimalt, British Columbia, on Chesapeake Bay, in Virginia’s James River regions, and in the Triangle area of North Carolina (Raleigh, Durham, Chapel Hill), and nearby Hillsborough. Some Canada geese have taken up permanent residence as far south as Florida, in places such as retention ponds in apartment complexes. Large resident populations of Canada geese are also present in much of the San Francisco Bay Area in Northern California

There were a few domestic duck present at this lake as well. Most interesting was the Crested Duck shown in the photograph below.

You may remember my post about water snakes hunting fish in a small pool of water from a month or so ago. The water in this spot has dried up and refilled a couple of times in the interim. On this afternoon the pool was full with both water and fish—plus a few other surprises.

Last time it was Plainbelly Water Snakes hunting here, but not this time. Juvenile Diamondback Water Snakes were the snake of the day. They were busy hunting bass and catfish fry stranded in the pool after the waters from a recent rain shower receded.

More dragonflies awaited me at the top of a nearby hill. A smaller pond surrounded by willow trees sits atop this spot. Its a good habitat for many different kinds of urban wildlife—this Blue Dasher included:

Where you find water you will find Red-eared Sliders.

Members of the heron family also enjoy spending time in the willow trees around this pond. On this afternoon I found a lone Snowy Egret and several Yellow-crowned Night Herons waiting for their opportunity to hunt along the pond’s margins.

As the shadows began to grow long at the end of the day, I made my way back up to the main lake. There I was pleased to find a lone Pied-billed Grebe. This little guy was holding steady on a single point on the water. He was spending his time grooming and posturing with his wings. I’m not sure how to explain his behavior, but it was unusual and new in my experience.

Here is what Wikipedia has to say about the charming Pied-billed Grebe:

Pied-billed grebes rarely fly. They make a slow dive frequently, especially when in danger, diving to about 20 ft (6.1 m) or less. They dive for about 30 seconds and may move to a more secluded area of the water, allowing only the head to be visible to watch the danger dissipate. This frequency in diving has earned them the description of being reclusive or shy in nature. It has also earned them nicknames like “hell-diver.” They rarely spend time in flocks. Their courtship include calling and sometimes duets. Males will show territorial behaviour if another male is at the edge of his territory. They face each other and then turn their heads and bills up. Then they turn away and start calling. Then they turn back around to look at one another

Around on the far side of the lake is a meadow covered hill where small white wildflowers are growing. Hidden among all of the delicate petals was a small cottontail rabbit. Can you see him in the picture below?

Hispid Cotton Rats emerged from the landscaping to feed as night began to fall.

So closes my efforts to follow the Mute Swan family for this summer. The young cygnet—the only one of an initial three to survive—is strong and healthy. His parents have done a commendable job keeping him safe in the four and a half months it has taken him to grow from a tiny young bird to his present size.

I understand that this pond becomes a hot bed of migrating ducks of all kinds during our winter months. I will pay this spot another visit later in the year! 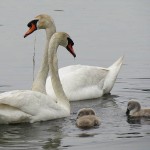 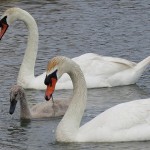 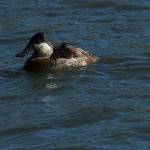