This interesting odd couple are very dedicated to each other. This is a male wild Mallard and his friend, the distantly related domestic duck, known as an American Pekin.

I have been visiting this pond for several weeks now, and these two ducks are always together. Strangely, the domestic duck also appears to be a male as indicated by his curly tail feathers (a trait the two ducks have in common). So, I’m not quite sure what is going on with these two. Strange. Here is what Wikipedia has to say about the Mallard and their relation to many breed of domesticated ducks:

The Mallard (/ˈmælɑrd/ or /ˈmælərd/) or Wild Duck (Anas platyrhynchos) is a dabbling duck which breeds throughout the temperate and subtropical Americas, Europe, Asia, and North Africa, and has been introduced to New Zealand and Australia. This duck belongs to the subfamily Anatinae of the waterfowl family Anatidae.

The male birds (drakes) have a glossy green head and are grey on wings and belly, while the females have mainly brown-speckled plumage. Mallards live in wetlands, eat water plants and small animals, and are gregarious. This species is the ancestor of most breeds of domestic ducks.

The American Pekin Duck, Pekin duck, or Long Island duck (Anas platyrhynchos domestica, or Anas peking), is a breed of domesticated duck used primarily for egg and meat production. It was bred from the Mallard in China. The ancestors of those ducks originated from the canals which linked waterways in Nanjing and originally had small bodies and black feathers. With the relocation of the Chinese capital to Beijing, supply barge traffic increased in the area which would often spill grain on which the ducks fed. Over time, the ducks slowly increased in size and grew white feathers. By the Five Dynasties, the new breed of duck had been domesticated by Chinese farmers 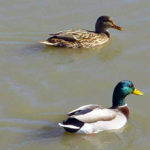 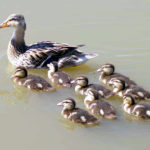 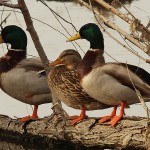 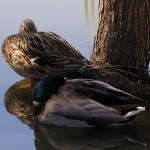