A reader clued me in on this fantastic Great Horned Owl sighting. What we have here is a pair of four to five week old owlets waiting patiently in the nest while their parents are out hunting. This is a first for me, I have never seen Great Horned Owls nesting on a transmission tower before. It is said that Great Horned Owls do not make nests of their own. Instead they take over the nests of other birds. The large nests built by American Crows, Red-tailed Hawks, and Great Blue Herons are favored by these owls.

I have found a couple of examples of Great Horned Owls nesting in the midst of a Great Blue Heron rookery. This situation creates a very interesting dynamic, where a powerful predator is stationed in such close proximity to potential prey. Posts covering this kind of nesting arrangement can be found here: Great Horned Owl – VCDB Nest. 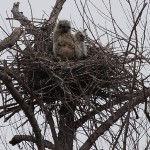 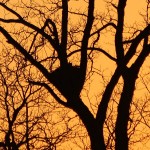 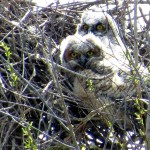