Rio Grande Wild Turkey were reintroduced into the public lands around Lewisville Lake in February of 2005. Since then the turkeys have held on tenaciously, and their numbers appear to be growing.

I came across this group of Wild Turkeys by pure chance. I had passed by this way only thirty minutes earlier headed in the opposite direction. Upon my return I just happened to reach the railroad track at exactly the same time these turkeys came strolling by.

I first spotted the birds while I was still behind vegetation that was too dense to photograph through. As I watched them pass by in front of me, I took a deep breath and then patiently began moving through the underbrush as quietly and quickly as I could.

Once past the Greenbriar vines, I was now faced with climbing the gravel covered railroad track berm without alerting the turkeys. They were rapidly putting distance between us and I was afraid I would soon miss my chance for pictures.

Fortunately, I was able to make it to the top of the berm and snap a few photographs before the turkeys spotted me.

Once they saw me though, all bets were off. The fast moving birds hightailed it down the railroad tracks, and despite my halfhearted efforts to follow them, the distance between us continued to grow. 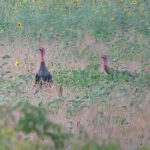 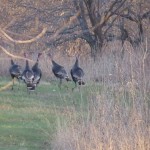 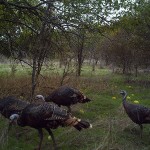 One Reply to “Wild Turkey – Left Behind”