Wikipedia has this to say about Three-toed Box Turtles:

The Three-toed box turtle (Terrapene carolina triunguis) is a subspecies within the genus of hinge-shelled turtles commonly referred to as box turtles. This subspecies is native to the south-central part of the United States and is the official reptile of the state of Missouri.

Three-toed box turtles are so named due to the number of toes on the back feet, but some think that there are some 4-toed examples too. However, some speculate that the 4-toed individuals are actually Eastern box turtle × three-toed box turtle hybrids. Three-toed box turtles have a domed shell which grows to an average 4.5 to 5 inches in length. The record shell length for this subspecies is 7 inches. The highest part of its carapace or upper shell is more posteriorly positioned than in the other subspecies. The dorsal and limb coloration is commonly completely absent, although some dark blotches are common in adult turtles. These areas more often being a uniform olive green or tan color. Sometimes, faint yellow dots or lines are visible in the center of each large scute. In the males, the head and throat often display yellow, red, or orange spots. Frequently the bottom shell or plastron is a straw yellow color, and has far fewer dark markings than the plastrons of other subspecies. 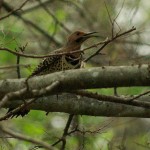