Both adult eagles were absent from the nest and the general area when I arrived on Sunday morning. In fact, neither of the two eaglets were visible at the time either. I am amazed at their ability to disappear in the nest despite their nearly full grown size.

It seemed like it was going to be a slow day at the nest this time out, but within about a half hour or so I began to notice some stirring in the nest. Just enough to allow me verify that both eaglets were present and accounted for.

Things picked up significantly a little later when dad showed up with lunch—a fish I believe. The adult male only stayed a little while. He ate a little and then bailed out the front of the tower, leaving the rest of the fish for the juveniles. In an unusual move the adult eagle immediately disappeared behind the tree line and was not seen again. I wonder if he found a perch there just out of my line of sight.

Back in the nest, one of the eaglets decided to take advantage of the steadily blowing wind and use it to help exercise his wings. This is a moment I have been waiting to see. These young birds will be fledging soon.

It is said that the first set of flight feather an eagle grows will be the longest of its life. This gives a juvenile eagle’s wings a longer and narrower profile than that of a broad-winged adult. 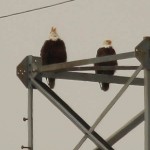 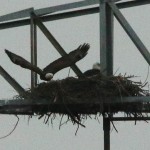