This report comes to us from Grant Shepard. He found this Western Chorus Frog under some carpeting deep in the forest at Oak Point Preserve in Plano, Texas. According to Grant, this species is completely absent in most developed areas but is sort of abundant out in the nether regions of Collin County. Even there you will often hear them but rarely see them.

The photo of the frog against Grant’s hand shows a unique trait of the chorus frog—they move their heads independent of their bodies much like a treefrog. They will also walk short distances—like a tree frog. Most other frogs to not do this—they move in leaps and their head is stationary.

Grant has been herping Collin and Dallas county for 15 years and has never found one of these frogs so close to development as in this case. 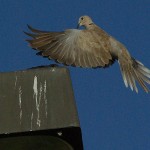