In contrast to many other raptor species, the sexes differ more in plumage than in size. Males have blue-grey wings with black spots and white undersides with black barring. The back is rufous, with barring on the lower half. The belly and flanks are white with black spotting. The tail is also rufous, with a white or rufous tip and a black subterminal band. The back and wings of the female American Kestrel are rufous with dark brown barring. The undersides of the females are creamy to buff with heavy brown streaking. The tail is noticeably different from the male’s, being rufous in color with numerous narrow dark black bars. Juveniles exhibit coloration patterns similar to the adults’. In both sexes, the head is white with a bluish-grey top. There are also two narrow, vertical black facial markings on each side of the head, while other falcons have one. Two black spots (ocelli) can be found on each side of the white or orangish nape. The function of these spots is debated, but the most commonly accepted theory is that they act as “false eyes”, and help to protect the bird from potential attackers. The wings are moderately long, fairly narrow, and taper to a point. 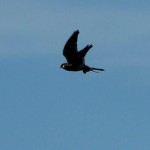