I first observed this juvenile Red-tailed Hawk from half way across the Village Creek Drying Beds. This young bird was hover hunting over the southwest corner of the property when an aggressive American Kestrel—a much smaller falcon—intercepted the hawk and attempted to drive him away. The kestrel had, only moments earlier, successfully steered a Cooper’s Hawk away from the drying beds. He only had limited success with the Red-tailed Hawk, however. The young red-tail did respond to the kestrel’s harassment by breaking off his hovering, but he did not leave the property. Instead, the Red-tailed Hawk lighted on a nearby utility pole, and stayed there until I had made my way around to his location. In the end, it was my unwanted intrusion that finally convinced the hawk that it was time to move along, and he soared away to the southwest. 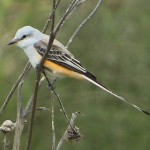 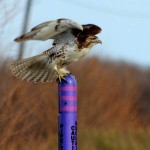 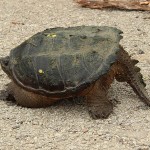