This was a fun observation.

We spent Sunday morning walking through Carrollton’s Greenbelt Park in Nob Hill. Heavy rains had passed through overnight, and the ground was still wet. It was overcast and threatening rain all morning, but we finished up in time to miss the worst of it.

For some reason this kind of weather brings out the wildlife. Red-tailed Hawks were the most notable example on this day, and we observed 3, maybe 4 during our brief outing. I spotted the first one near the west end of the park. It was perched in the trees far across the creek, and it was too far away for good photographs.

A few minutes later I was taking pictures of a pair of Scissor-tailed Flycatchers, when the kids yelled something to me about a Red-tailed Hawk. I turned just in time to see the hawk land on the ground about 100 yards/91 meters from where I was standing.

The Red-tail set down on the far side of a small pond, and the only way I could get closer was via a finger of land that extended into the water. The hawk was preoccupied with something on the ground, and I considered myself lucky to be able to close the distance between us. Even so I was still too far away to get the closeup shots I wanted.

I started taking pictures anyways, fully expecting the hawk to fly away as soon as he saw me. Sure enough, after just a few snapshots the hawk took to the air. But, then he did the unexpected. The hawk banked hard, and flew right at me. He swooped in low over the water, and then up to land in the tree I was standing under.

I couldn’t believe my luck! Cautiously, I stepped from under the tree, again fully expecting the bird to fly away as soon as I came into view. I was surprised when the Red-tailed Hawk looked right at me and did not flee even though we were only a few yards/meters apart.

The hawk was perched at the top of the tree, and was mostly hidden by leaves. Only his head was visible above the branches. This arrangement did not make for the best composition in the world, but I started taking pictures anyways. I’ve only had a few opportunities to get this close to a red-tail, and I wanted to make the best of this one. I was sure he would be on his way very soon.

Sure enough, after just a few photographs the hawk spread his wings and began flapping. I figured my picture taking was over, but once again the Red-tail surprised me. He took to the air all right, but only long enough to move from where he was to a much better position at the very top of the tree. This new perch gave me a completely unobstructed view of this magnificence bird.

Right away I noticed the striped tail of a first year juvenile. The bird’s lack of skittishness around me may have been due to his relative youth and inexperience.

Then again, he may just have really wanted to have his picture taken. I was happy to oblige. 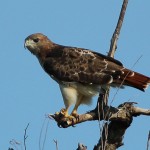 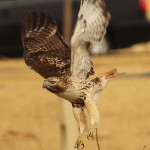 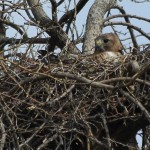