I didn’t realize what I had with these pictures until I got home and had a better look at them. The pictures are of damselflies know as bluets in the process of mating, but if you look closely at the photographs below you will see that there is an unexpected twist.

Bluets are a group of species of damselfly where the males are typically blue in color. There are many different type of bluets, and differentiating between the various species can be difficult. Subtle pattern difference seems to be one of the keys to a positive identification. The damselflies in these pictures are known as Familiar Bluets (scientific name: Enallagma civile).

Damselflies have an unusual method of mating. First, the male bends his abdomen forward and deposits sperm in a specialized structure located under his second and third abdominal segments. Later, the male will take hold of a female just behind her head using grasping appendages located on the tip of his abdomen. After this connection is made the male and female will fly in tandem, as required, until the mating process is completed.

Next, the female will loop her abdomen around and clasp it to the underside of the male in order to pick up the sperm he had deposited there earlier.

After insemination, the female will release her grip on the males abdomen, but the male will retain his hold on the female. When the female is ready to lay her eggs, which she will deposit just under the surface of the water, the male will take on all of the flying duties. He will use his connection to the female to help suspend her over the water while she lays her eggs.

It’s not clear what stage of mating the pair in these photographs are in. But, it doesn’t matter, because something has gone horribly wrong.

Look closely at this picture. The male bluet is missing his head. The coupling of these two damselflies has been violently interrupted by an intruding spider (possibly a Ground Crab Spider).

Look at the male bluet’s thorax at the location where the head should be attached. There is a thin thread of tissue leading from the decapitated damselfly’s body and ending at the spider. Zooming in it becomes apparent that the spider is holding and feeding on the damselfly’s head. 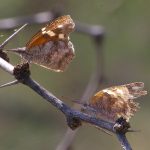 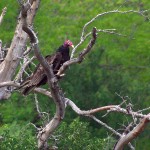 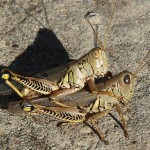 One Reply to “Familiar Bluet – Interrupted”