This observation surprised me a little bit. I haven’t seen anything like this before.

I was walking next to small pond in the Great Trinity Forest. There was vegetation between me and the water which obscured my view of the pond somewhat. Then I heard a splash. I looked down and there along the bank I noticed a muddy Beaver or Nutria slide. It was a place where these large aquatic rodents enter and exit the water. The slide led to a break in the reeds that lined the pond’s shore.

At first I assumed that I had spooked a basking turtle back into the water. That kind of thing happens frequently. If not that, I hoped that it might actually be a Beaver or Nutria. Earlier, I had come across and Anhinga that dived under the water when he saw me, so that was a possibility as well. Instead, when I looked to the pond, I saw a dark, amorphous blob roiling the water. Glare kept me from being able to see details, and the black cloud dropped deeper into the murky water and then mixed in with some reeds.

I was startled because I couldn’t imagine what this might be. But, whatever it was, it was big! Maybe 3ft/1m in diameter. My first thought was that it was a algae covered Alligator Snapping Turtle patrolling the edge of the pond. But, as the indistinct shape reemerged from the reeds I could tell that was not the right guess.

Finally, my telephoto lens revealed the true identity of the the mass. It was a school of juvenile catfish, each only 3 to 4 inches long (7.5 to 10 centimeters). 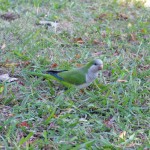 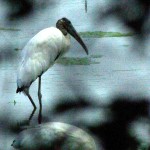 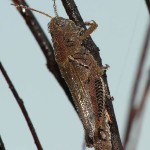 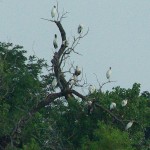 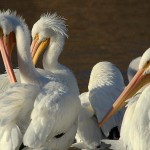