I came across this Texas Garter Snake in the Lake Highlands area of Dallas, Texas. The snake was lying motionless in the dirt and gravel under an elevated DART rail. I’ve seen many of these snakes in this area on previous visits, but never more than fleeting glimpses. They are always quick to flee when they detect someone approaching.

Because of this, I was puzzled when the snake did not try to retreat as I drew nearer. The snake’s head was covered by the leaves of a small bush, and maybe because of this the snake had the impression that he was more concealed than he actually was.

In any case, I could not see the condition of the snake’s head, and the though crossed my mind that maybe he was dead. I took a few picture and then attempted to prod the snake with my boot. Still no response from the reptile.

I began taking more pictures, working my way around the snake’s position. After traversing 180 degrees I could see the snake’s head. It looked OK. A closer examination of the body showed that the snake was breathing. There was still no reaction from the snake even as I returned to my original position. I decided to gently prod the snake with a stick. That did the trick! The Texas Garter Snake coiled itself up into a defensive position in the blink of an eye.

Notice how the snake has flattened its body in order to appear larger. It has also flared it scales to reveal spots of light color that are not normally visible. Both behaviors are a natural part of the snake’s defensive response. 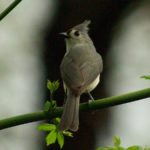 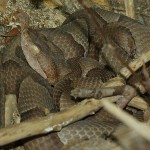 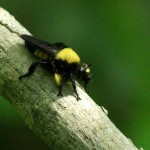 Robber Fly – Looking at You 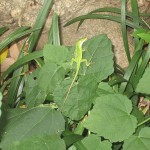