This observation takes place a few weeks after I first photographed Raccoons in my backyard. It took some time, but I was finally able to get some videos of my nighttime guests.

Originally, the Raccoons found their way into my back yard when they discovered some old oranges I had thrown out into the bushes. On this night they are after peanuts we had left out for the squirrels. The Raccoons seem to prefer the peanuts to the oranges, and make short work of them.

The number of Raccoons in this observation has jumped to three, and I’m starting to wonder just how many of these critters my backyard can hold!

Between the three Raccoons there was plenty of clowning around for the camera to see. Watch as they push and shove each other jockeying for position around the dish of peanuts. At other times you can see them react to unexpected noises (maybe me looking out the window). One instance of this sends a Raccoon fleeing up a tree… Only to return a short time later. Evidently, the lure of the peanuts was stronger than the power of his caution!

The real fun begins when the Raccoons discover the camera! 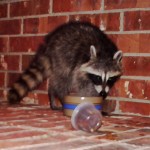 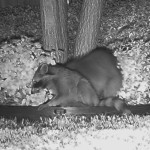 Raccoon – What’s Been Eating My Oranges? 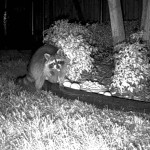 2 Replies to “Raccoon – Return of the Orange Eaters”