Another group of Cedar Waxwings migrating through the DFW Area in early March. Congregations such as this one will litter the ground below the tree with berry-colored and seed-filled bird droppings.

Wikipedia has this to say about the Cedar Waxwing:

Cedar Waxwings are a medium sized bird approximately 6–7 in (15–18 cm) long and weigh roughly 30 g (1.1 oz). They are smaller and more brown than their close relative, the Bohemian Waxwing (which breeds farther to the north and west). It is a “silky, shiny collection of brown, gray, and lemon-yellow, accented with a subdued crest, rakish black mask, and brilliant-red wax droplets on the wing feathers.” These birds’ most prominent feature is this small cluster of red wax-like droplets on tips of secondary flight feathers on the wings, a feature they share with the Bohemian Waxwing (but not the Japanese Waxwing). The wings are “broad and pointed, like a starling’s.” The tail is typically yellow or orange depending on diet. Birds that have fed on berries of introduced Eurasian honeysuckles while growing tail feathers will have darker orange-tipped tail-feathers. The tail is somewhat short, and square-tipped. Adults have a pale yellow belly. The Waxwing’s crest often “lies flat and droops over the back of the head.” It has a short and wide bill. The Waxwing’s black mask has a thin white border. Immature birds are streaked on the throat and flanks, and often do not have the black mask of the adults. Males and females look alike.

The flight of waxwings is strong and direct, and the movement of the flock in flight resembles that of a flock of small pale European Starlings. Cedar Waxwings fly at 40 km/h (25 mph) and fly at an altitude of 610 m (2,000 ft). 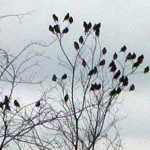 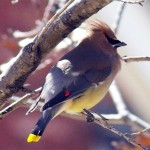 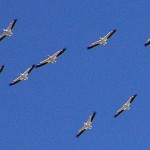