This Bobcat was observed hunting in the flowerbed of this residence just before dark.

The cat was very intent on pursuing something in the bushes. This neighborhood abounds with Eastern Cottontails, Fox Squirrels, and various field rats—any one of which would have been suitable prey for this young cat.

The observation of this Bobcat was made from an automobile. The occupants of the vehicle followed and watched the Bobcat for nearly a half hour as it made is way through the neighborhood. The Bobcat was reportedly aware that he was being followed, but seemed little bothered by the attention.

Several days after this Bobcat was photographed, another possible sighting occurred just a few blocks away. This time, what appeared to be a juvenile Bobcat was observed crossing a residential street before disappearing into the landscaping of a nearby house.

Both of these observations occurred at around 7:30 pm on their respective days 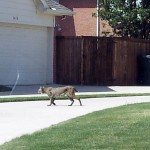 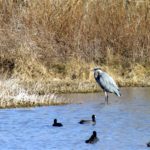