This article will remain a work in progress for some time. There are a lot of different kinds of turtles in the Dallas/Fort Worth metroplex, so there will be a lot of infographics to work up in support of this project. Documenting each one will be no small task.

Over the years I have found that there are a several turtle species in North Texas that I consistently have difficulty identifying. Information online concerning these turtles has proven to be sparse, confusing, and unreliable. I always find it difficult to sort through.

On the rare occasions when I do photograph one of these turtles the effort to track down a good ID always turns into a sizable chore. To make matters worse, I typically forget the important details promptly after I complete whatever turtle related project I happened to be working on at the time. That means I am required to do the research all over again every time I encounter one of these hard-to-identify reptiles.

What I really need is a good place to keep all of the pertinent information in a handy location, so that I don’t have to search as long and hard the next time it is needed. That kind of repository is what I hope this post will become. In this article—over time—I will collect infographics and other relevant information about turtles found in the DFW area. With a little luck, that will make identifications easier going forward.

This article won’t include all of the turtles that can be found in Dallas/Fort Worth, only the most common native varieties. There are a number of introduced species and a few rarely encountered natives that I will not include here. I will start with a family of turtles that has given me much trouble in the past—the Map Turtles. Scroll down to have a look…

The Ornate Box Turtle is a relatively small, terrestrial turtle. They can be found in prairies and wooded areas all across Texas. A subspecies—the Desert Box Turtle (Terapene ornata luteola)—lives in the Trans-Pecos part of the state.

Adult Ornate Box Turtles have a domed carapace which is approximately 5 inches in length. These turtles may approach 8 inches in length when the head and tail are fully extended.

On the turtle’s underside, the plastron is hinged, allowing the Ornate Box Turtle to completely close its shell after fully retracting its head, legs, and tail. This defense mechanism is where this and other box turtles derive their name.

The beak is equipped with a single cusped tomia.

Coloration can vary dramatically between individual turtles, but in general the carapace will be darkly colored with distinct yellow markings. A yellow mid-dorsal stripe is present running the length of the carapace. On the underside, the plastron is decorated with an elaborate pattern of dark and yellow patterns. The head and front legs may be colored with various areas of red, orange, or yellow.

Male box turtles are typically slightly smaller than females. Eyes will be a deep red with males, and brown or yellow on females. Males also possess a larger, thicker tail than females.

The Ornate Box Turtle can live to be 30 or more years old. They are diurnal in their behaviors, operating most often at dawn and dusk. They are omnivores, and will consume a wide variety of available foods. They can often be found feeding on earthworms emerging from the ground during or after a suitable rain event.

Ornate Box Turtles hibernate in the winter. They sit out all extremes in hot or cold weather buried in a shallow burrow.

Three-toed Box Turtles are very similar in general appearance to Ornate Box Turtles. Size is comparable between the two at 5 inches for the adult carapace, and 7 inches over all. The beak on both turtles includes a single cusped tomium.

Differences include three toes on the back feet, rather than four as is the case with the Ornate Box Turtle. Three-toed Box Turtles often have an olive colored carapace, which can sometimes include a mixture of dark and light markings. These patterns are typically fainter and less vivid than those on an Ornate Box Turtle.

Coloration can vary significantly between individual turtles. Olive or brown skin may contain vivid spots of red, yellow, orange, and white. The eyes of males are red, and those of female turtles will be yellow or brown.

Three-toed Box Turtles share many behaviors with the Ornate Box Turtle, including the ability to fully retract their head, legs, and tail into their shell.

Diet and foraging strategies are also largely shared by both species of box turtle. Both are generalists, eating a wide range of animals and vegetable matter. Three-toed Box Turtles are often inspired to search for food during or shortly after rain showers.

Three-toed Box Turtles are found throughout the eastern part of the state. Prairies and wooded areas are their preferred habitats. These turtles are typically active early and late in the day. They hibernate in the winter and seek shelter from both hot and cold extremes by burying themselves in shallow burrows.

These aquatic turtles will most frequently be found basking in and around the Trinity River, its major tributaries, and reservoirs. The Mississippi Map Turtle is the only map turtle typically found in the metroplex. Important identification considerations includes verification that location and habitat are appropriate and verification of physical characteristics.

Overall coloration includes shades of green and brown. The Mississippi Map Turtle’s head, tail, and legs will be dark in color with pale striping in a variety of patterns. Stripe patterns are not consistent between individual turtles. Even the distinctive post orbital crescent can vary significantly in size in general shape.

Mississippi Map Turtles can live to be 30 years old. Adult females are decidedly larger than adult males. Diet consists of a variety of aquatic invertebrates and vegetation. 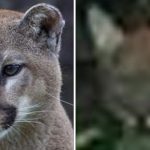 North Texas Mountain Lion: Is It or Isn’t It?
Dallas/Fort WorthMississippi Map Turtle
By DFWUWJune 22, 2020Chris Jackson's DFW Urban Wildlife4 Comments on Turtles of the Dallas/Fort Worth Metroplex

4 Replies to “Turtles of the Dallas/Fort Worth Metroplex”