The Mute Swan family was on the far side of the pond when I arrived this week. All four member were looking happy and healthy. The two young cygnets are growing fast and becoming stronger everyday.

You never know what the future holds, but I am beginning to believe these two juveniles are well positioned to escape the fate of their third sibling who disappeared sometime during his first week of life.

The swans wasted no time coming over to my side of the small lake, where they paused only briefly before hauling themselves from the water.

Once on dry land the entire family spent an extended amount of time primping and preening. It was quite a sight to see the tiny juveniles mimicking the behavior of the adults.

Speaking of comparing the adults to the juveniles, be sure and notice the large, powerful wings of the big male in the picture below. I will mention them again later in this post. After finding a nice sunny patch of grass to recreate in, the two cygnets began a program of thorough grooming. All the while they remained under the watchful and attentive eye of their parents. It is a pleasure to observe how dedicated the adult birds are to caring for their young. In the picture below one of the tiny, underdeveloped wings of the baby swan is clearly visible. Compare it to the picture of the adult’s wings that I pointed out earlier in the article and you will get some idea of just how much further these young swans have to go to reach adulthood. Soon the family group was back in the water once again ready to patrol the small lake. When swimming the group maintains a disciplined formation which keeps the two cygnets boxed in by the adult birds positioned in the front and back of the procession. This is certainly done with the protection of the young birds in mind. On two separate occasions I witnessed defensive behaviors from the adult swans. The first occurred when a wayward Nutria swam too close to the family group. The male swan sprung from the water and noisily pounced on the hapless rodent. It was a brutal attack that sent the Nutria diving for cover. He re-surfaces several yards away looking shaken, but no worse for wear.

A little later I got to see how the adult swans reacted when another Mute Swan tried to land in their pond. I have read that Mute Swans are very territorial, and that under normal conditions only a single pair will occupy a pond of this size.

Sure enough, just the approach of a third adult swan sent our big male into action. As you can see in the picture below, just a nip or two on the hiney was all it took to encourage the interloper to retreat back to where he came from. This proud papa is not to be trifled with! 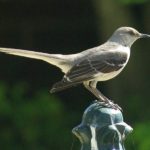