It has been a difficult couple of weeks out at the Seagoville Bald Eagle nest. The eagles are being stressed and it has been some time since I have last photographed them engaging in what I would consider normal behavior.

For those who do not know, there are big plans underway where this nest is concerned. The eagle’s nest is currently located in the arm of a transmission tower carrying high voltage lines supplying southeast Dallas. The tower overlooks the John Bunker Sands Wetland Center, and in many ways it is fortunate for the eagles that their chosen nesting site was located so near an organization noted for their dedication to environmental concerns.

From a strictly eagle point of view, the birds chose wisely when they picked this spot to build their nest and raise their young. The tower provides the eagles with a commanding view of the surrounding countryside. And the wetland center and nearby East Fork of the Trinity River provide an ample supply of food. It’s a seemingly perfect situation—but there is a catch. It has been determined that the high voltage power lines are a danger to the eagles, and at the same time, the eagles are also putting the electrical lines at risk.

In order to ensure uninterrupted power to the communities serviced by these lines, and with the safety and well-being of the eagles in mind, it has been decided that the entire nest should be moved to a safer and more secure location.

It’s an extravagant plan that involves the construction of a new tower specifically for the eagle’s nest. The new tower will be located quite some distance from the utility right of way in order to discourage the eagles from continuing to use those towers. To ensure that the eagles will accept this new location some additions steps are also being taken. Exclusion spikes have been installed on other towers along this line in order to discourage the eagles from simply re-nesting on one of them.

In addition to all of this, the bases of many of the towers along this line are also being replaced. It is not clear if or how this relates to the effort to relocate the eagle’s nest. It may just be routine maintenance.

After this year’s baby eagles fledge and leave the area, the existing nest, transmission tower arm and all, will be carefully removed and then transferred to the new location where it will be attached to the dedicated tower.

I have never been 100 percent convinced about the necessity of this action, but one thing is certain—if the eagle nest is successfully reestablished in this new location things will be better for everyone. The eagles will be safer. The power lines will be safer. Security around the tower will be easier to enforce, and the view of the eagles from the John Bunker Sands Wetland Center will be much improved.

But this assumes that the eagles will make the move to the new nest location, and that is far from guaranteed. It may even be unlikely. To pull this off successfully will require a near perfect execution of the plan, and unfortunately there have already been some hiccups.

Some people have seen fit to approach the nest too closely in order to take pictures of the eagles, and this has kept the birds upset for hours on end. This activity amounts to trespassing and harassment of the nesting eagles and their young. Both amateur and professional photographers alike are guilty of these transgressions. Some of the resulting photographs of the harassed eagles are likely available for sale right now.

There have also been some miscommunications between contractors working on the line and some ill-timed work done in close proximity to the eagle’s nest. These activities are stressing the eagles as well, and it is showing in their behavior.

There are a number of factors that are not quite optimal at the present time, and as a consequence I no longer feel comfortable being involved with documenting the nest. Because of this, I have decided that it would be prudent to remove myself from the process, and this will be my last update on the eagle’s nest for the year.

It is my hope that this action will help focus some attention on what is going on around the nest. At the very least, no one should be able to use my work as an excuse for their own indiscretions any longer. This step will also allow me to keep an independent voice concerning what I do and do not post on this web site, and that is a very important consideration for me as well.

Once again I will link to the relevant regulations and guidelines here: National Bald Eagle Management Guidelines. In a nutshell, the law states that it is not permissible to harass the eagles intentionally or otherwise. It doesn’t matter if you are inside or outside the guideline perimeters. Trespassing laws are also in effect for the properties surrounding the nest. No big surprise there. Private property and fence lines should be respected. The best publicly accessible place to view the eagles is inside the John Bunker Sands Wetland Center.

The companies involved in initiating and overseeing the nest move are all fine organizations. I fully expect that this effort will be a success. But, I also think this would be a good time for everyone involved to take a deep breath, slow down for a second, and rededicate themselves to getting this job done right. A tremendous amount of time and money are being invested in this effort. How ridiculous would it be for it to fail just because a few common sense precautions were not taken? I believe there is always more room to be proactive where the well-being of the eagles is concerned. Some independent expert oversight would likely be of great value here as well.

This is a critical time for the eagles and their young. The eaglets must not be inadvertently flushed from the nest before they are old enough to fly or injury or death could result. The adult eagles must maintain their attachment to the current nest or they will not return next year. It is possible this attachment will be jeopardized if they are continually stressed and/or the eaglets are lost.

Eagles are adapted to the possibility that they may need to rebuild their nest when they return each winter. Weather and other factors can work to dismantle a nest in the off season. Eagles are also capable choosing a new nesting site if something happens to their original one. In nature trees fall and cliff shelves break off.

What eagles are not adapted to is the need to follow a nest to a new location. They will require some encouragement to make this transition.

That makes excluding the eagles from re-nesting in the current location or on any of the other towers in the line of key importance to the success of this effort, and I’m not sure the technique currently being used will be effective. In fact, it seems possible that the exclusion spikes as installed may actually make these arms more appealing as nesting sites because the spikes will act as fences and anchors to help hold the nesting material in place. See the picture below and judge for yourself. 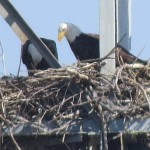 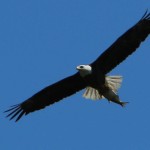 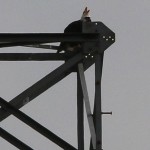