NOTE – As indicated in the comment section below, this is not a Tarantula Hawk. It is a mydas fly Tarantula Hawk mimic—Mydas xanthopterus. Thanks to Robin for the correction.

This large wasp is known as a Tarantula Hawk (Pepsis formosa). It is so named because of its habit of capturing tarantulas to serve as a food source for its offspring.

The female Tarantula Hawk will seek out the large, hairy spiders and give them a paralyzing sting. She then carries the tarantula back to her burrow where she will burying it along with a single egg. When the Tarantula Hawk egg hatches the larva wasp feeds on the still living spider until it is time to pupate.

Adult Tarantula Hawks feed exclusively on nectar, pollen, and fruit. These wasps hunt spiders only to serve as food for their larvae. As a consequence it is only the female Tarantula Hawk that is equipped to sting. As might be expected, the wasp requires a powerful sting in order to subdue large tarantulas. Reportedly a sting from one of these wasp is extremely painful to people.

The wasp in these pictures is a male Tarantula Hawk as is indicated by the small, straight antennae (females have curled antennae), and consequently he has no stinger. 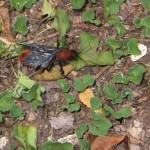 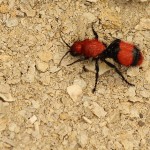 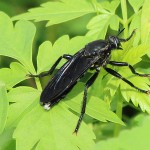