Our Whooping Crane friends were still present at Lake Ray Hubbard at 2pm on Sunday afternoon (May 5, 2013). This notes their first full week at this location.

A few things had changed since my last visit, however. The water in this part of the lake appears to have receded significantly. A resident of a nearby neighborhood explained to me that a strong north wind can actually push the shallow water in the part of the lake back into the main body of Ray Hubbard further to the south. That appears to be what has happened here. The end result is that much more of the lake bed here is now exposed and drying.

The other notable difference this visit was the location of the birds themselves. The pair of cranes had moved from the grassy west bank out into the water a couple of dozen yards/meters from shore. The combination of these two factors allowed for a slightly better look at the cranes on this afternoon. Later we were thrilled to see the cranes take to the air and fly back to their preferred spot on the bank at low altitude. The latest news on these cranes is that they are first year juveniles out of White Lake in Louisiana. The pair has wandered away from White Lake, for whatever reason, but they are expected to return in the near future. They are part of a reintroduction effort designed to re-establish a non-migratory population in Louisiana. They are officially known as L3-12 (male) and L5-12 (female), and are banded and equipped with GPS transceivers. The birds are being tracked and carefully monitored by researchers and the authorities.

Observing these two Whooping Cranes is best accomplished from the east side of the lake. The distances are great, and a viewing aid will be needed. But, staying on this side of the lake will ensure that the cranes are not flushed unnecessarily and are allowed to leave the area of their own accord. Hopefully, with proper consideration, everyone who is interested will have a chance to see them in person.

UPDATE: [May 5, 2013 9:45am] I just received a request to pass this message on. It comes from LeeAnn Linam, Texas Nature Watch:

I noticed on the Dallas Audubon Forum that one of the observers gave advice to not get closer than 600 feet. When we created Texas Whooper Watch we conformed to U.S. Fish and Wildlife Service guidelines that observers should not get closer to whooping cranes than 2000 feet. I dont know who from Louisiana suggested the 600 limit; however, Id like to get the word out there to the birding community that keeping a distance of at least 2000 is the legal guideline in place for whooping cranes in Texas and will provide the most protection for the birds. Would you be able to post that guidance (since Im not on the Dallas Audubon Forum)? Thanks

I’ve looked at it. If you simply stay in the area you shot your photos from, and it appears that most folks are observing from (the park), they are within the guidelines. They just shouldn’t try to approach any closer. 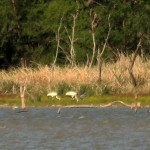 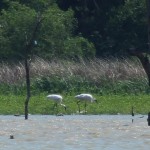 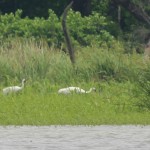