Walking through the Village Creek Drying Beds in Arlington, Texas this weekend we were thrilled to observe a third year juvenile Bald Eagle soar over our position. Juvenile Bald Eagles do not sport the white feathers of adulthood on their heads and tails, instead they are dark overall with just splotches of white feathers here and there. But there is no mistaking a Bald Eagle for anything else. These birds are huge, with long angular wings carried horizontally to the ground. They have massive, heavy beaks that are very distinctive. This individual was seen as he circled lazily over head. Gliding on a thermal updraft the eagle never flapped his wings until he was at last ready to move on. When the eagle turned his attention to leaving, a mighty flap or two of his wings sent him rocketing off to the east on a trajectory meant to follow the winding Trinity River. Within minutes of the juvenile’s exit we were allowed another rare treat. This time it was a fully adult Bald Eagle, complete with the expected white feathers, that overflew the VCDB. This bird was very, very high in the sky, but the photographs are unmistakable. It was eagle day at the Village Creek Drying Beds on Sunday! 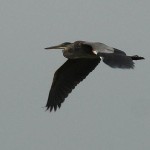 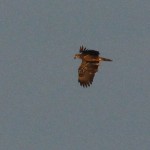 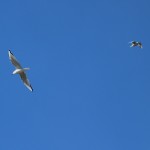 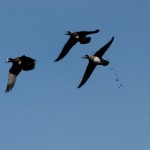 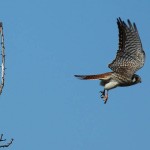