This Jumping Spider (most likely a Phidppus carolinensis) was observed lowering itself on a web with prey in hand. This spider’s victim appears to be some kind of the stink bug or squash bug. The spider eventually came to rest on a vine where he began devouring his early morning meal. 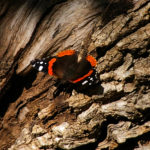 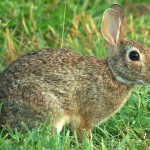