What is it about the intersection of city streets that attracts birds? Clearly there is something about the bird’s psychology that causes these areas to have a special appeal.

Species that are common at intersections in the Dallas/Fort Worth area include Rock Doves, Eurasian Collared-doves, and as in the case of the videos below, European Starlings and Great-tailed Grackles.

European Starlings and Great-tailed Grackles often gather into large communal roosts as the sun begins to set. As you will see in the videos below, thousands of birds can gather in a relatively small area. These congregations are loud and messy. Perhaps, if the underlying appeal of the intersection configuration could be determined, an effective and humane deterrent could be developed.

As it is now, once these birds decide that they prefer a particular location, there is little that can be done to dissuade them. Even a major predator in their midst does does little to discourage the roosting birds.

Evidence? As I was videoing these starlings and grackles I observed a juvenile Red-tailed Hawk perched in the heart of the black bird congregation. The hawk was working hard to appear uninterested. More about him tomorrow. 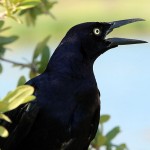 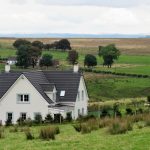