This is a follow up visit to two Mute Swans that I discovered in a remote small lake located in the southern part of The Colony.

The lake these birds live on is located on a recently abandoned ranch. The question is whether these swans are wild birds or if they were brought to the pond by the ranch’s previous owners. The swans seem accustomed to human interaction. They will swim across the lake, if necessary, to get closer to people. They behave as if they expect to be fed.

Until this visit I had not seen the swans fly. On this visit one of the birds flew across the pond as soon as he saw me. The other bird followed close behind, but swam across instead of flying.

It has been suggested to me that this is a male/female pair, and that the female has probably had her wings pinioned. Pinioning is the act of removing a small portion of a bird’s wing in order to prevent the bird from flying. This done so that a captive bird can be allowed to roam a pond freely, without the use of an enclosure. I have been told that if the female is pinioned then the male will stay by her side, even if he can still fly. 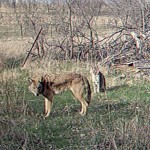 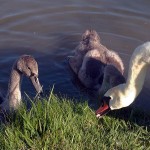 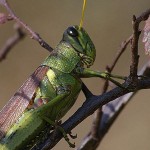